Take this with a bag of salt, not a pinch.

Safari Day 3, morning game drive. Things were all a-buzz at morning tea…  2 baby lions were spotted INSIDE the camp in the early morning hours!  The rangers’ concern was that they may not be able to find their way out, and if they took too long, Mama Lion would come looking for them!

After driving around for a while, we found them. So freaking cute!

At this point, one of us made a joke about the Lion King. So Ranger Westley took it upon himself to lecture us about the pitfalls of believing what you see in movies, and told us that films such as the Lion King need to be taken with “A bag of salt, not a pinch.” Hmm… guess that explains the dearth of singing animals in the bush. But seriously… as a grown adult, not to mention a BIOLOGIST, I am well aware that Disney cartoons do not accurately depict animal life, chief!

We also saw some buffalo (I think?). Very picturesque.

We were lucky enough to see this little one during feeding time. These moments never cease to amaze me!

4 Comments on “Take this with a bag of salt, not a pinch.” 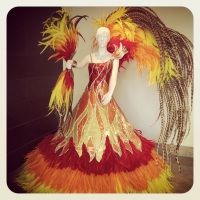